Lisa, 14, and Lisie 15, from the Democratic Republic of Congo (DRC) look forlorn as they wait for a UNHCR truck to transport them from Nteko border point to Nyakabande Transit Centre in Kisoro, Western Uganda. It is 60kms from Nteko to Nyakabande.

Lisa and Lisie are sisters who arrived in Uganda on the morning of February 16, 2018. They lost both parents when the rebels attacked their home in DRC in October 2017. The two sisters crossed to Uganda by themselves having walked for 21kms

Speaking in Kiswahili, “Our parents were killed in October 2017. We first took refuge in Kiwanja, a village in Congo. The situation was not any better. There is a lot of fighting going on,” explains Lisie who is clad in a stained yellow blouse and a flowery skirt with unkempt hair, they had clearly walked for days without refreshment.

Asked how they ended up at Nteko (Uganda-DRC border point), Lisa says, “We saw people running and we asked them where they were going. Some people mentioned Uganda. We also decided to come here. All of us kept asking for directions until we arrived at the border.” 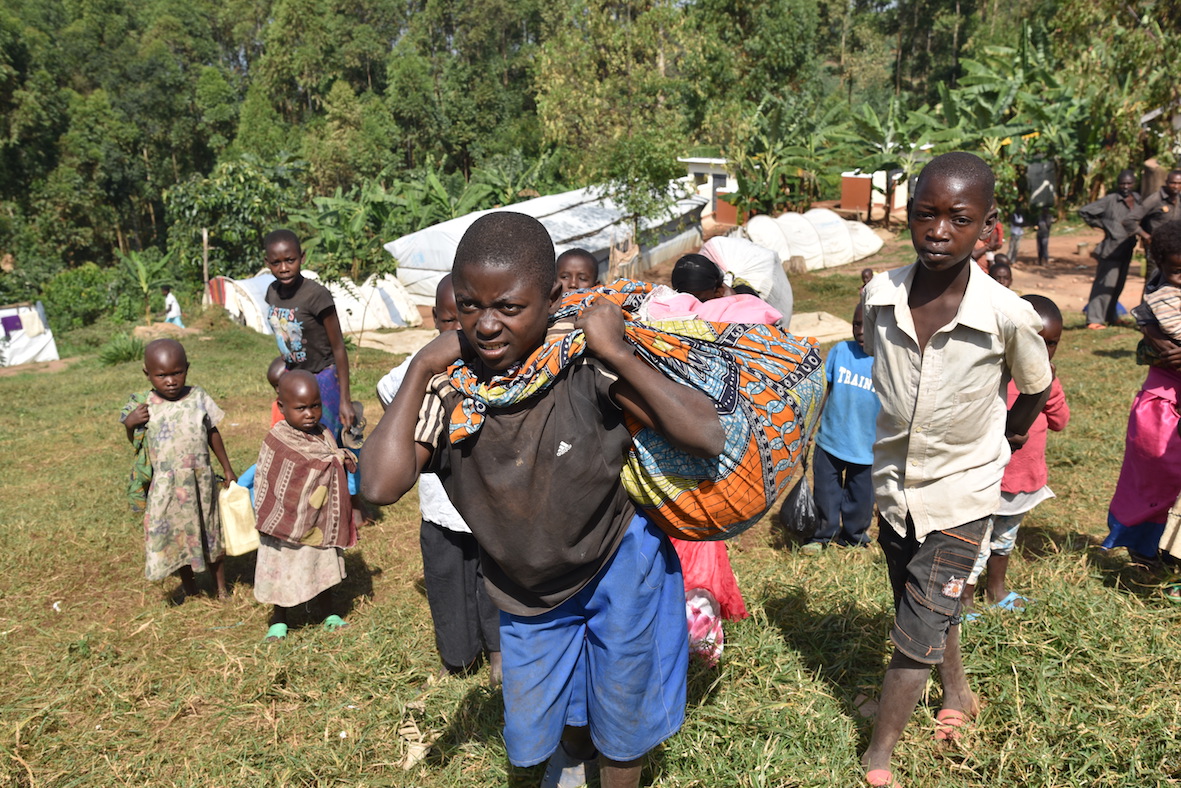 When their parents died, Lisa and Lisie who were in secondary school lost their care and protection and could not continue with their studies. Even though they are now orphans, their hope while in Uganda is to undertake vocational courses in tailoring. “We hope to re-build our lives here in Uganda. When we arrived here, we were treated well and we hope for the best,” says Lisie. Lisie and Lisa are among hundreds of unaccompanied and separated children that cross into Uganda through various border points including Nteko in Kisoro district, Ntoroko district among others. In Nteko, the refugees from DRC are received by the Uganda People’s Defence Forces (UPDF).

Paul Odeke, UPDF Officer in Charge of Nteko explains that all refugees are registered and identity cards collected from them for verification. Odeke adds that they check their luggage for guns, knives, pangas among other things. “The refugees especially women carry knives most likely for peeling purposes. We don’t allow them to proceed to the transit centre with them or any sharp instrument.”

According to reports from UNICEF’s Mbarara/Central region field office, between 100-200 unaccompanied and separate children cross through Kisoro every week. The children separated from their parents and families because of conflict and displacement are among the most vulnerable.

At Nyakabande Transit Centre, four unaccompanied children are seated on a wooden box pondering their next move. 13-year-old Yusuf says he walked with 16-year-old Marvin for two days. For the two days, they didn’t eat nor drink anything. “We met some old woman on the road who offered us accommodation on the third day,” says Marvin. Yusuf noted that he has information that his mother and brother are settled in Rwamwanja refugee settlement. At the time the mother crossed to Uganda in 2017, Yusuf had gone to see his grandmother. “I left my grandmother alone and by herself. She is staying at a health centre now and I am hoping she is safe,” Yusuf says. Yusuf and Marvin want to continue with their education while in Uganda. Marvin wants to be a teacher because “teaching is good.”

Moses Nantumu, Acting team leader, Care and Assistance for Forced Migrants (CAFOMI) revealed that they will engage Uganda Red Cross Society to trace and reunify Yusuf with his mother and brother in Rwamwanja. “The child will go with his file to Rwamwanja. The authorities will use the details in the file to trace the relatives. If the relatives are not found in that settlement, they will get foster care takers for him as the search continues,” Nantumu. CAFOMI is currently managing the operation of Nyakabande Transit Centre.

In Uganda, on average, 869 Congolese refugees arrive every day. 61 per cent of the arrivals are children. The refugees are fleeing renewed attacks of their villages as well as the intertribal violence, arbitrary killings, rape, abductions and looting in Ituri. According to the Office of the Prime Minister and UNHCR, the total number of refugees from DRC who call Uganda home is 251,730 as at 31st January 2018.

In Ntoroko, Kisoro and other entry points into Uganda, UNICEF is supporting the district local governments/local authorities and other agencies in the delivery of basic services in order to fulfil the rights of all affected children both amongst the host communities and within the new arrivals.

Specifically, support is provided for immunization and nutrition screening at transit sites, reception centres and settlements where the refugees have been transferred. In addition, UNICEF is working with the Uganda Red Cross Society to promote positive hygiene behaviour, provision of clean water and appropriate sanitation to reduce the spread of water borne disease. Together with Save the Children, UNICEF supports a protective environment for children especially the most vulnerable amongst them and engages with the refugee hosting districts to support early learning for children.